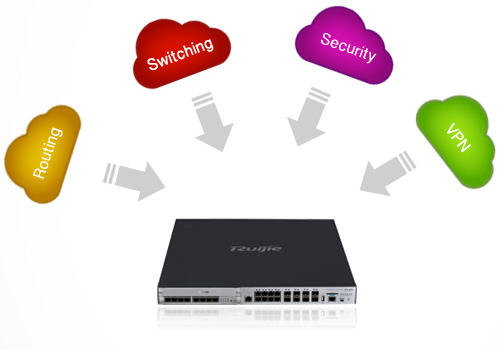 With the non-blocking switching architecture and the industry-leading multi-core processor, the RG-RSR30-X Series adopts Ruijie’s unique VCPU and multithreading technologies to achieve isolation of data forwarding plane and protocol control plane, as well as load balancing among the cores. In addition, it allows demand-based resource allocation for processing cores. When the device is processing protocols and control packets, the system can allocate more resources to the respective processing core. In the case of handling an increased load of packet forwarding, the related processing core can be allocated with more resources to complete the task. The series thereby realizes easy resource management and control.

Complete modularization: The greatest advantage of modular operating system lies in the respective independence of different features and processing systems to ensure the mutual isolation of failures, significantly increasing the system stability. In addition, the complete modularization boosts the development and testing efficiency of the new features without affecting existing ones so as to accelerate the development of new features and technologies.

Open system: The Hardware Abstraction Layer of RGOS allows connection with different devices through the respective hardware drivers. Currently, the RGOS operating system has been integrated with all Ruijie routers and switches, and this integration is about to extend to wireless, storage, security and other product lines. RGOS also features POSIX (Portable Operating System Interface), which is an international standard interface allowing operating system core to dispatch and communicate with various POSIX-compliant modules.

Through the X-Flow technology, the forwarding performance basically will not be affected even when services such as QoS, ACL, NAT and PBR are enabled on the processing plane.

The advanced X-Flow and fast-forwarding technologies together with leading features such as GR, FRR and BFD improve the convergence mechanism of the traditional routing protocols to achieve fast convergence of large-scale networks.

•  The RG-RSR30-X can be deployed as the gateway of campuses, enterprises, vocational schools and private schools that serve less than 5000 users.

Extending Cloudflare to all your networks